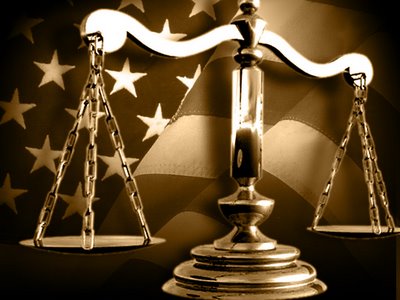 EFFECTS OF INCARCERATION ON YOUNG ADULTS

Criminal records can haunt young adults for years:  "95 percent of young people enter the juvenile justice system for nonviolent crimes like theft or vandalism . . . but because some juvenile court records remain open to the public when they should have been sealed or expunged, these young people can be denied jobs, housing and even admission to college."  New York Times

What Happens When We Send Minors To Adult Prisons: "Alonza Thomas was one of the first minors convicted under Proposition 21, which strengthened California laws allowing minors to be tried as adults. The 15-year-old, who was a first-time offender, faced a possible four-decade sentence but received a reduced sentence of 13 years in an adult prison for pleading guilty to committing armed robbery. He was released just last year.  The "Frontline" documentary “Stickup Kid” chronicles Thomas’ journey, during which he spent the majority of his time in mental health treatment facilities and solitary confinement and even attempted suicide. Even today, Thomas takes medication for depression, anxiety and psychosis to cope with the “psychological duress” of his prison sentence." Huffington Post

A Shooter, His Victim and Race: "IAN MANUEL is a black man who has spent most of his life in prison. Yet he still has a most unusual advocate calling for his release: a white woman whom he met when he shot her in the face. Manuel fired the bullet when he was barely 13, and he fit all too neatly into racial stereotypes, especially that of the black predator who had to be locked away forever. One of the greatest racial disparities in America is in the justice system, and fear of young black criminals like Manuel helped lead to mass incarceration policies that resulted in a sixfold increase in the number of Americans in prison after 1970. Yet, as his one-time victim points out (speaking with a reconstructed jaw), it’s complicated." New York Times

How mentors helped one former a girl gang leader become a Benedict College graduate: "When the Benedict College president officially conferred the title of graduate on Monica Watts and her classmates Saturday morning, the Southeast Washington native pumped her right fist above her head in triumph. That same fist had earned Watts the nickname “KO” for knockouts she posted whenever she squared off with girls, women and even young men as she fought her way through the Woodland Terrace neighborhood in Ward 8 as a leader of a girl gang during high school. . . . The path to graduation day is filled with obstacles for any college student, but particularly for young people trying to emerge from streets and lives that have been impacted by poverty and violence. They often don’t make it for many reasons: lack of money, the lure of the streets." Washington Post

How Subway Dancing Became A New York City Art Form -- And A Crime: "In recent months . . . dozens of performers have been arrested for reckless endangerment -- a serious charge that can result in a day or two behind bars and a criminal record that never goes away. For many of these kids, the subway quite literally represents a potential path from poverty to a better life.  Huffington Post

Police Patrols in New York Public Housing Draw Scrutiny: "Amid broader calls to ratchet down the pressure on low-level crimes, little scrutiny has been paid to a routine patrol tactic used by the Police Department: In public housing, officers walking a beat are watching not only for offenses big and small but also for behavior that is not illegal at all. . . . Attention from the police to noncriminal rule-breaking — recorded on forms known as field reports — is growing, frustrating some public housing tenants as well as elected officials who say the police should be focusing on crime, not acting as what amounts to armed hall monitors." New York Times

Marijuana May Soon Spark Just a Ticket in New York: "The new guidelines would allow people with low-level marijuana possession to be issued a court summons rather than requiring them to get handcuffed, arrested, and brought into the precinct for finger-printing, the New York Times reports.
Police arrested some 50,000 people a year on minor marijuana charges during the administration of former Mayor Michael Bloomberg." Time

No Progress on Marijuana Arrests: "The new analysis of state arrest data . . . shows that between March and August this year [2014], during the de Blasio administration, officers made 15,324 misdemeanor arrests under the statute that contains the “public view” provision — or about 500 more than in the comparable period in 2013, during the Bloomberg administration." New York Times

The Problem With New York’s Marijuana Policy: "While running for office, Bill de Blasio promised that as mayor he would amend the practice of singling out young black and Latino men for unfair and, in some cases, illegal arrests for possessing minuscule amounts of marijuana. . . . The [new] policy, however, does not reach the fundamental problem of discriminatory policing . . . Moreover, by shifting marijuana cases from the regular courts into the summons system, which does not identify the accused by race, the city loses the ability to track the disparate impact that petty marijuana prosecutions are having on minority communities. The city has to make the summons system more transparent." New York Times

Teenagers to See Counselor, Not Judge, for Minor Crimes: "Teenagers arrested for minor crimes will soon be diverted to counseling before they ever come before a judge under a new pilot program in Brooklyn and Manhattan . . . The program will apply to 16- and 17-year-olds arrested for the first time for low-level offenses, like jumping a subway turnstile, shoplifting or trespassing, the Manhattan district attorney, Cyrus R. Vance Jr., said." New York Times

In a Safer Age, U.S. Rethinks Its ‘Tough on Crime’ System: "The fall in serious crime was accompanied by declines in other social ills such as teenage pregnancy, child abuse and juvenile delinquency, emphasizing the role of cultural shifts beyond the ken of the justice system. 'Young people are growing up in a safer environment and behaving more responsibly,' said Jeremy Travis, president of the John Jay College of Criminal Justice in New York and co-editor of a 2014 report by the National Academy of Sciences on the consequences of mass incarceration." New York Times

Crime and Punishment: "One thing the grand jury decision in Ferguson, Mo., has sent back to the surface is just how difficult it is to have cross-racial discussions about crime and punishment in this country. That is largely because, perceptually and experientially, we live in vastly different worlds, worlds in which phrases like “bad choices,” “personal responsibility” and “tailspin of culture” must battle for primacy with “structural inequity,” “systemic bias” and “culture of oppression.”" New York Times

Posted by Dan Salemson at 12:06 PM No comments: 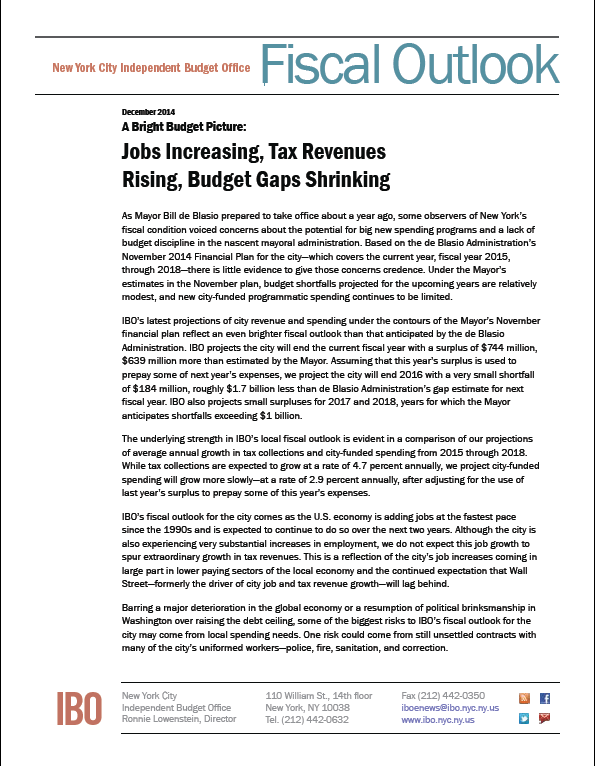 After seeing Jim Dwyer's recent column highlighting projections that "midlevel jobs that pay $50,000 to $100,000 a year are expected to account for 42 percent of the job growth in New York over the next four years," I caught up with the Independent Budget Office's fiscal outlook for 2015-2018 (PDF).

The findings of this report buttress the recommendations of JobFirstNYC's Unleashing the Economic Power of the 35 Percent, particularly the need to qualify young adults for mid-wage jobs. These jobs will significantly increase, at the same time that labor shortages will make them harder to fill.

On a positive note, job growth in New York City since the end of the Great Recession has been far more balanced than in the past.  The financial services and real estate sector, which accounted for accounted for 12 percent of all job growth as recently as 2003 to 2008, is now projected to grow by only 5.5 percent between 2014 and 2018. Reduced reliance on a specific industry is giving way to a wider diversity of available jobs.

The jobs emerging today also pay more than in the past.  Between 2009 and 2014, the city's lowest-wage industries (hospitality and retail trade) accounted for 41.5 percent of overall job growth. The IBO now predicts that these sectors will only account for 20.7 percent of growth graphics by 2018.  Middle wage jobs are projected to be 42.2 percent of all new jobs during this period, a better than one/third increase.

Robust job growth has led to a 2 percent drop in the unemployment rate, to 6.4 percent in the past year. The rate is expected to decline by another 1 percent during 2015 with the addition of another 80,000 jobs (with 75,000 more predicted for 2016.) The IBO projects "exceptionally strong labor force growth" through 2017, followed by a marked slowdown caused by a shrinking cohort of younger people entering the labor force and a growing cohort of older workers retiring.

What does this mean for workforce development providers?  We will be leaving jobs "on the table" unless we expand training in industries expected to grow, particularly in the education, health services and professional and business services sectors.  Even the retail sector, a traditional entry into the labor market under severe strain around the country, is still projected to grow in New York City, albeit at a slower rate.  Retail in NYC is being driven by tourists and so online shopping is not having the impact that it might, although I do see more vacancies on some local shopping strips but that could be due to other factors, like rising commercial rents.
Posted by Dan Salemson at 11:09 AM No comments:

Thank you to our partners and supporters who make these accomplishments possible.
We look forward to an exiting and challenging 2015!
Posted by Dan Salemson at 3:54 PM No comments: