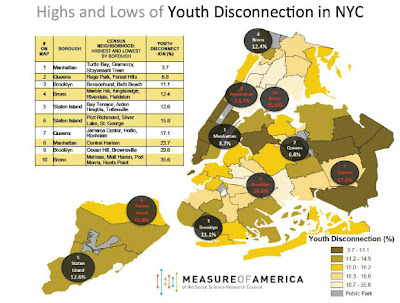 With a tip o' the hat to Lindsey McCormack, the Measure of America project at the Social Science Research Council has recently released One in Seven: Ranking Youth Disconnection in the 25 Largest Metro Areas. The report examines 16- to 24-year-olds who are not in school and not working—5.8 million youth or an astonishing one in seven young people nationwide—and reveals startling gaps among neighborhoods, cities, and racial and ethnic groups. While the Boston metro area tops the list with the lowest overall rate of youth disconnection at 9%, Phoenix ranks last at 18.8%. African Americans have the highest rate of youth disconnection, a startling 22.5%, nearly twice the national average, and women generally fare better than men.

A companion publication, Youth Disconnection in New York City (PDF), estimates that 350,000 young people—or 15.2 percent of all 16-24 year olds—in the New York metro area are neither in school nor working.  (This figure slightly exceeds the national average and gives New York City the ninth highest rate of youth disconnection of the country's 25 largest metro areas.)  The Big Apple is also home to the widest range of disconnection by neighborhood.  In Manhattan's relatively affluent Community District 6 (Turtle Bay, Tudor City, Gramercy, Stuyvesant Town), just 3.7 percent of young people are considered disconnected, while the figure soars to over 35 percent in parts of the South Bronx.

“One in Seven is a wake-up call to this country,” says Sarah Burd-Sharps, co-author of the study. “At precisely the time in life when young people form their adult identities and move towards self-sufficiency, 5.8 million young Americans are adrift at society’s margins. Disconnection can affect everything from earnings and financial independence to physical and mental health, and even marital prospects.”

As youth disconnection in America rises, so do the costs to society. Last year alone, youth disconnection cost taxpayers $93.7 billion in government support and lost tax revenue.
“Today we are paying for failure,” Burd-Sharps explains. “In an environment where everyone is looking to reduce spending, we can invest in success by pinpointing the groups and places being left behind, and taking action to build connections between communities and both educational and employment opportunities.”

Kristen Lewis, co-author of One in Seven, adds, “In the next five years, more than 29 million job openings will need to be filled by workers with some college or a certificate, but not necessarily a four-year degree.” She explains, “In today’s economy, everyone needs some education beyond high school, but as a society, we need to rethink the ‘college-for-all’ mantra that devalues and stigmatizes career and technical education. Instead, we should provide robust pathways to postsecondary certificates or associate degree programs for those who choose this route.”

Among the key findings from One in Seven:
Among the report’s key recommendations: