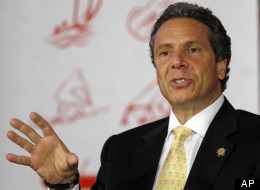 Yesterday, Gov. Andrew M. Cuomo called for a change in New York State law to decriminalize possession of small amounts of marijuana in public view, a move that would drastically reduce the number of people, especially minority youth, who could be arrested for marijuana possession as a result of police stops.

As noted last month, for the last decade New York City has held the unenviable position as national leader in unwarranted (in all senses of the word) stop-and-frisk searches by police.  This use of this tactic has risen from fewer than 100,000 cases in 2002 to nearly 700,000 in 2011, supposedly justified by the need to get weapons off the street -- although stops in 2011 yielded only one gun for every 3,000 people stopped.

In practice, the stop-and-frisk program has been targeted overwhelmingly at minorities, especially minority youth, who often find themselves stopped for vague reasons such as "furtive movements" (351,739 stops -- or 51% of the total -- in 2011), "suspicious bulge," and "clothes commonly used in a crime."  Once stopped, people can be arrested for any number of infractions that otherwise would not have justified police action.  The most egregious of these charges has been for possession of small amounts of marijuana, with 50,684 arrests — one out of every seven arrests made in the city in 2011, more than for any other offense.  In 2010, the city spent $75 million to put pot-smokers behind bars.

In essence, the police have created a Catch-22 for the people stopped.  In 1977 the state legislature reduced the penalty for possession of 25 grams or less of marijuana to a violation, which carries a maximum fine of $100 for first-time offenders.  But it left public display or public use of marijuana as a misdemeanor crime, setting a no-win situation.  When people empty their pockets at the demands of the police, any marijuana they may have is brought into "public view" and therefore opens them up to arrest; not complying with police orders, however, also puts the person at risk for arrest.

Governor Cuomo's call for decriminalization has gained significant support across the political spectrum.  The New York Times and New York City Comptroller John Liu both published Op-Ed pieces supporting the move and calling for more significant reforms of police practice.  Even Mayor Michael Bloomberg and New York City Police Commissioner Ray Kelly, both longtime defenders of the stop-and-frisk program, have endorsed the governor's proposal.
Posted by Dan Salemson at 6:14 AM