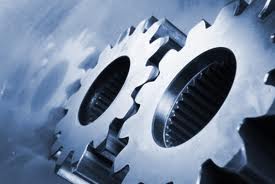 Is American manufacturing dying or thriving?

In 1970, 30 percent of American workers spent their days in factories; today, that figure is 12 percent and dropping.  Many of the jobs that paid high wages to those with a high school diploma (or less) have disappeared, with workers scrambling to find lower paying work elsewhere.   Commentators and politicians routinely dismiss manufacturing as an important part of the economy.

And yet the value of the products from the factories that remain is reaching record highs of nearly $2 trillion annually -- roughly equal to the output of China's factories.

So what's going on?

The plight of American manufacturing has been well told.  As the only industrialized country to emerge from World War II with its factories and infrastructure intact, the US reigned supreme for more than a quarter century as supplier to the world.  This dominance created the middle class and provided a standard of living that became the envy of the world.  Over time, however, European and Asian countries rebuilt, enacted policies to support key industries, adopted innovative production practices, and proved that they could make comparable -- and often superior -- products for less.  The emergence of China onto the international scene in the late 1980s offered a low wage workforce that proved irresistible for low skill manufacturing, while a succession of free trade agreements encouraged the shifting of production out of the US.  Throughout the 1990s and 2000s, industries that once anchored entire regions either disappeared (textiles, consumer electronics) or diminished (furniture, autos) in the face of international competition.

But outsourcing does not explain the whole story.

Technology has reshaped the face of manufacturing worldwide.  With much of the assembly line now automated, factories simply need far fewer workers than in the past.  No one is immune from the march of technology, even in low wage countries.  The Chinese company Foxconn, for example, employs over one million people to make electronics like the Apple iPhone and HP computers.  It recently announced plans to replace much of its labor force with more than a million robots over the next two years -- and this in a country where the average factory worker earns less than $1.50 per hour.

America has also been slow in enacting an official industrial policy.  European and Asian governments routinely subsidize and protect specific industries considered vital to their national interests.  While the Obama administration has been more proactive than most -- propping up the "Big Three" automakers in 2009 to save more than one million jobs, investing in solar power and advanced batteries for electric cars -- its efforts in manufacturing pale in comparison to the nearly $13 trillion bailout of the banking industry that has done little to create new jobs.

Why does it matter if manufacturing disappears?

Email ThisBlogThis!Share to TwitterShare to FacebookShare to Pinterest
Labels: Manufacturing