Our pre-Labor Day post focused on the impact of the current economic malaise on young people.  Now a new study by University of Chicago economist Casey B. Mulligan sheds more light on just how much the youngest workers have suffered (bold added for emphasis):

Using data from the Census Bureau’s Household Survey via the National Bureau of Economic Research, I calculated the average hours worked by age for 2007 (people not working during the week of the survey count as zero hours worked) and then again for 2010. The chart below displays each age group’s percentage change from 2007 to 2010. For example, the chart shows that the average 16-year-old in 2010 worked 40 percent fewer hours than the average 16-year-old did in 2007. 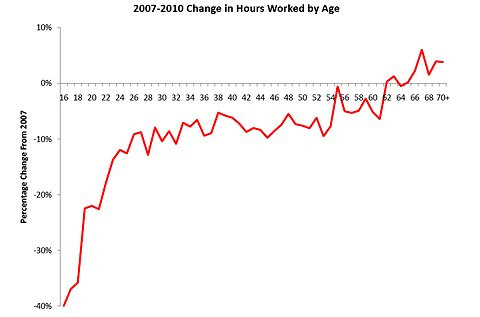 But the chart also shows that labor losses lessen with age and are positive for a number of age groups. In percentage terms, work hours fell the most for teenagers, reflecting the high teenage unemployment rate. After the teenagers, work hours fell the most for the age groups 20 to 29. Work-hours losses for groups in their 30s and 40s ranged 5 to 11 percent. Work hours also fell for age groups 50 to 59, but typically less in percentage terms than for the age groups aged less than 50.

Fewer work hours translates into significant loss of income.  New census data indicates that the earnings of young people have taken the biggest hit of any age group in the downturn, falling over 15% between 2007 to 2010. 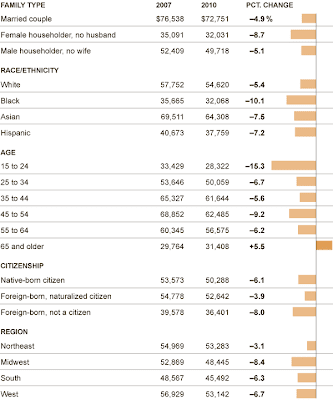 Reflecting these woes comes news that the number of Americans living below the poverty line has reached the highest level in the 52 years that the Census Bureau has been collecting information.  (Even these figures may underestimate the true extent of poverty in the US.)  The impact has been felt most by those at the bottom of the economic chain:

“We’re risking a new underclass,” said Timothy Smeeding, director of the Institute for Research on Poverty at the University of Wisconsin, Madison.

“Young, less-educated adults, mainly men, can’t support their children and form stable families because they are jobless,” he added.

But even the period of economic growth that came before the recession did little for the middle and bottom wage earners.

Arloc Sherman, a senior researcher at the Center on Budget and Policy Priorities, said that the period from 2001 to 2007 was the first recovery on record where the level of poverty was deeper, and median income of working-age people was lower, at the end than at the beginning.

Tough times, indeed, for today's youth.
Posted by Dan Salemson at 7:00 AM