How to create a job 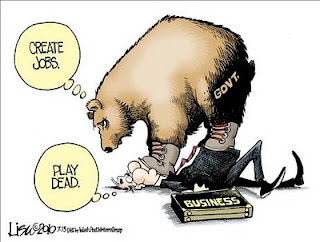 For all of the recent heated debate over stimulus spending, deficit reduction, taxes, etc., politicians of every stripe have hewed to the same underlying message: my approach will create the most jobs.  The next presidential election will almost certainly be decided by the public's perception of which candidate can do the most to turn the economy around.  But short of Keynesian-style mass hiring directly by the government -- a policy neither party has to date been willing to propose -- how do we get people back to work?

City Limits Magazine recently posed the question, "Can Job Training Reduce Unemployment?"  New York City spends more than $1 billion on a variety of job training programs and officials claim that they city puts 85,000 welfare recipients to work each year through the mandatory job search component of public assistance, and another 35,000 residents through the city-funded Workforce1 Career Center system.  But what does this really mean when the city is not creating enough jobs to keep up with population growth, let alone put the already jobless back to work?  In a time of mass unemployment, the article wonders, "are the training programs merely getting people jobs at the expense of other applicants, who end up taking their place on the unemployment line?"

If the quick placement model is merely rearranging the deck chairs on the Titanic, how could job training programs really create new opportunities?  From an economic perspective, a recession is the time to prepare the unemployed to for the high skilled jobs that are likely to emerge in the future.  Few programs, however, provide the type of intensive skills training that will benefit workers down the road.

Back in May, the radio program This American Life set out to discover whether politicians' rhetoric matched reality.  In an episode entitled How To Create A Job, the show asked some basic questions:

It seems like every politician has a plan for putting people back to work. But we and the Planet Money team couldn’t help but wonder…how do you create a job? Can politicians truly create many jobs? Is it possible the whole thing is just well-intentioned hot air?

The episode contains five sections, all of which are worth listening to.  For youth workers, the final story on the Pathstone workforce program in Rochester should not be missed.

The episode can be streamed for free from the show's website, or downloaded from iTunes or Amazon for $0.99.
Posted by Dan Salemson at 10:15 AM 1 comment:

An excellent opportunity to get disconnected young people involved in a positive movement next Monday, August 29th. 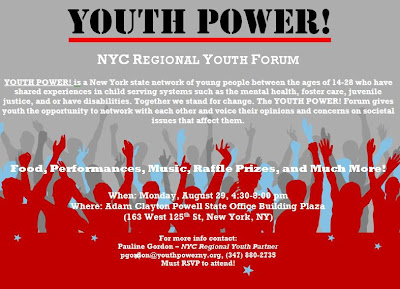 YOUTH POWER! is the New York State network of young people who have been labeled and are seeking change.  Together we have decided to speak up about our experiences because no one knows what it is like for us better than we do.  Through peer-to-peer mentoring, we empower young people to be active citizens, aware of government operations, their rights and the ability to use their voices to influence policies, practices, regulation and law.  We are young people helping other people, ensuring availability of self-help and peer support while changing systems so that young people get the support they need with the respect and dignity they deserve.


For more information, check out the New York City Regional Youth Forum Facebook page.
Posted by Dan Salemson at 9:00 AM No comments:

Periodically, JobsFirst NYC will highlight some of our favorite resources for youth workers in New York City.  Up this week: Juvenile Justice. 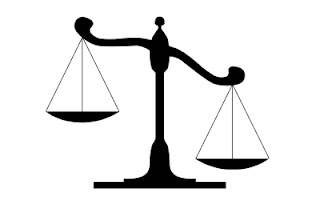 A criminal history can hamstring a young person's opportunities at employment, housing, and a host of other issues for decades to come.  Anyone who works with court-involved youth needs to understand how the court system functions, and the resources available to overcome the legal and social stigma of a criminal record.  Below are some of our favorites:

1) Citizens Crime Commission of NYC, Guide to Juvenile Justice in New York City (PDF, 2010)  New York's juvenile justice system has reached a point of extreme crisis. With increasing frequency, reports of fundamental breakdowns throughout the system have come to the public's attention. The city and state governments have responded with substantial reform plans. In light of this increasing attention and the complexity of the juvenile justice system in New York, the Crime Commission has developed a Guide to Juvenile Justice in New York City to enhance the public's understanding of the City's juvenile justice policies.

3) Workforce Professionals Training Institute, Getting the RAP Down: Employment Strategies for New Yorkers with Criminal Records (PDF, 2010).  They're out, they're in your program, now what?  Gathering insights from its popular "Getting the RAP Down" workshops and interviews with major players in the NYC reentry community, WPTI outlines the primary factors involved in successfully moving job seekers with criminal records into employment.  Developed by workforce practitioners for workforce practitioners, this detailed guide is full of concrete strategies for every step of the employment continuum.

4) Upper Manhattan Reentry Task Force, Welcome Home! An Upper Manhattan Resource Guide for Reentrants and Their Families (PDF, 2010).  The UMRTF has compiled a comprehensive guide to New York City entities providing services for people exiting the criminal justice system.  The guide is broken down by the following categories:


Have questions about a specific legal situation?  Need to find legal representation for a young person?  Check out the organizations below.

5) Youth Represent (www.youthrepresent.org) is a holistic youth defense and advocacy non-profit organization that provides criminal and civil legal representation to youth age 24 and under who are involved in the criminal justice system or who are experiencing legal problems because of past involvement in the criminal justice system.  Founder Laurie Parise wrote the immensely useful guide for young people, Know Your Rights: Understanding Juvenile & Criminal Records and Their Impact on Employment in New York State (PDF, 2009).

6) Legal Information for Families Today (LIFT) (www.liftonline.org) enhances access to justice for children and families by providing legal information, community education, and compassionate guidance within the New York family court system, while promoting system-wide reform of the courts and public agencies.  LIFT has prepared a number of useful publications for individuals navigating the family courts.


7) LawHelp/NY (www.LawHelp.org/NY) is an on-line tool for helping low-income New Yorkers solve their legal problems.  The website provides information about free legal services throughout New York, about legal rights in a broad range of substantive areas, about the court system, and about related advocacy, government and social service organizations.


8) The Legal Action Center (www.lac.org) and the National H.I.R.E. Network (www.hirenetwork.org) are leading advocates and resource centers for issues relating to ending discrimination against people who have criminal histories.  LAC provides consulting on specific legal issues, and both sites contain a wealth of free publications.


What cool resources have we overlooked?  Add them below in comments!
Posted by Dan Salemson at 9:00 AM No comments:

Can we do more by doing less?

What if social service programs have the wrong approach?

David Bornstein, author of How to Change the World, recently reported on an innovative approach to lifting families out of poverty.  Rejecting the traditional focus on poor people’s needs and deficits -- which often ignores or stifles their innate strengths -- the Family Independence Initiative (FII) takes a different tact.  Rather than creating centralized programs that offer prescribed solutions to the poor (the liberal approach) or assuming that prosperity will eventually "trickle down" if the wealthy are rewarded for their success (the conservative approach), FII offers a "third alternative" that shifts the responsibility for finding solutions back to low-income communities while providing resources and opportunity to those who take initiative.

FII's approach is simple: identify families that have the capacity for change; offer tools to identify their goals; and provide cash payments for every success they document.  Crucially, it also brings together similar families for monthly support meetings.  FII does not set the agenda for the meetings, nor are FII staff allowed to take any part in the proceedings beyond being observers.  In the absence of external advice, the groups quickly become sounding boards and cheering squads to encourage members on toward their goals.  With goals, solutions, and encouragement generated organically, participants tend to become much more committed to seeing change through.  In its demonstration projects to date, FII has seen dramatic increases in family wealth and stability within short periods of time.

Participant-driven programming is a key tenet of youth development principles, of course -- although one often more honored in the breach than in the observance.  Creating an environment that enables -- and indeed expects -- young people to take a central role in defining and supporting their own success and that of their peers, rewards them for measurable steps towards their goals, and continually seeks feedback about what works and doesn't work -- it all sounds like common sense, but is often missing from GED programs.

Can the approach outlined by FII work with disconnected youth?
Posted by Dan Salemson at 9:00 AM No comments:

If you can't stand the street, get into the kitchen

From CNN comes a report on New Orleans' Café Reconcile restaurant, which doubles as a job-training program that in ten years has prepared more than 600 young people to work in some of the finest restaurants and hotels in New Orleans.  Every 12 weeks, a new class is put through a “life skills” course where they learn interpersonal and work techniques, and then tackles the jobs of chefs, busboys, waiters, dishwashers and hosts.

This article got us thinking about how New York City could benefit from more programs focused on preparing disconnected youth for the culinary industry.  Home to over 23,000 restaurants, the Big Apple is the epicurean capital of the United States and offers limitless opportunities in food service -- an industry that will frequently overlook a checkered past if the applicant has the right skills.  Although a number of organizations offer some culinary skills preparation, many will not accept individuals who do not currently have a high school diploma / GED, are not currently enrolled in school, or do not meet certain disability criteria.

If you know of culinary programs open to young people, especially those without a GED, please let us know in the comments below.
Posted by Dan Salemson at 4:39 PM No comments: